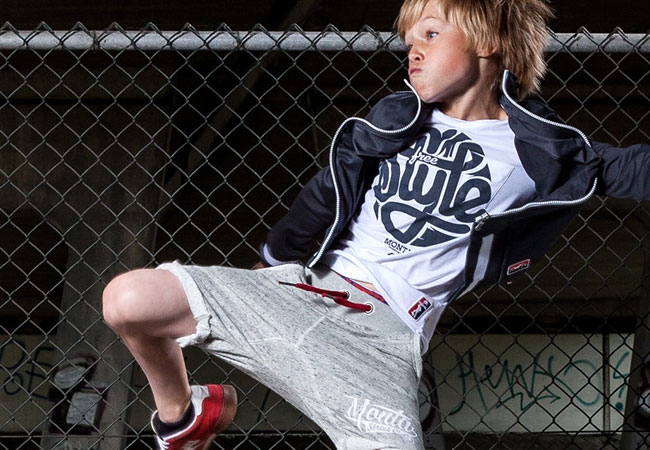 The new SS collection of MONTA JUNIORS, which is inspired by street soccer, has surprising army and jungle elements. The collection shows a lot of pastel shades, for both boys and girls. However, street soccer and the city remain characteristic for this sturdy collection.

The army and jungle theme is mostly reflected in the texts of prints and jungle-like camouflage. The collection has items with tone in tone prints and many washed and sprayed fabrics. Tie dye has been often used, just like the fabrics which are worn inside-out. Of course this collection has many sports influences. For instance, the fabric indigo sweat combined with denim is a recurring item. The ultimate combination between sports and casual!

In 1999, some die hard football players devised a plan to launch a sports brand that would amaze the world. That same sports brand carried the name MONTA. From that moment on street soccer was MONTA’s true soulmate. MONTA represents the street in all his forms; fashion, culture, and the values and principles of the most played sport of the world, which is played on the streets. MONTA distinguish itself clearly from other brands. In the Netherlands MONTA Juniors is represented by Tumble ‘N Dry BV and Edgar Davids. Davids is the face of MONTA, the personification of the brand.

THE FREE ONLINE TRADE SHOW FOR THE FASHION INDUSTRY

NextCollections.com is a secure Online Trade Fair for the Fashion Industry free for registered retailers. Registered retailers have free access to the latest previews, videos, contacts and lots of B2B info of established and upcoming fashion brands. 24/7, 365 days a year!